My intention is deliberate when I share that I don’t believe when we as Indigenous people serve in the armed forces that we are fighting for “freedom”. I believe we are giving up our rights as members of our nations when we serve.

Now this could be tricky and may upset people who disagree with me. I understand its a sensitive issue. I have members from my family who served and it’s an ongoing discussion, does an Indigenous person today have to serve in the armed services to be a warrior?

I challenge readers to think about how Indigenous veterans are honored and taken care of post service. If a person served in a war, lets look at the health services they are provided. Huge sacrifice given that its minimal and most often includes a life long ailment. The sacrifice is beyond repairable and one the individual lives with. Often times medication is a lifelong sentence with tortuous and sleepless nights. How do I know? Because my brother Erik is a veteran of Desert Storm and my uncle Dave a veteran of Vietnam. I see, hear, and feel their pain. They suffer from a more recent form of PTSD and were affected by the chemical warfare involved. My uncle has lost his vision in one eye and my brother has uncontrollable nerve twitches. So yeah, lets talk about “sacrifices” and “freedom”.

As I begin to think about decolonization more fluidly I can say that I view service in the armed forces much more differently today. Are we really fighting for freedom? Is the killing of innocent children, women, and elderly in other parts of the world really such a threat to our freedom? Consider the innocent people who view the US with such disdain and think critically about how an individual may identify. I for one have learned to clearly state I am an Indigenous woman from the Dine and NiMiiPuu nations with Lenape ancestry, so as not to state I am “American.”

I reside on the homelands of my ancestors who were here thousands of years before white colonial settlers arrived. I have read enough of US whitewashed version of “American” history, one that omits the annihilation and genocide of my ancestors in the name of Manifest Destiny. In 1877, when the US waged a war against my Nimiipuu ancestors, a war was started and one that my home community is still recovering from. Post traumatic stress and unresolved historical grief is a reality that many of us have to contend with. While others are lost or still trying to find their way using alcohol, drug abuse, and commit domestic violence, rape, lateral violence, and other community issues that are prevalent one does not have to go that far back into history to find the root of the causes. So when I hear “pride” in the armed service, please excuse me while I step out to touch the sky.

Pardon me if I do not celebrate and wave around a flag that represents the colonization and rape and pillage of Indigenous people and their homelands. As I think reflectively, I am aware that the imperial right of a country is founded on colonialism. Rooted in that imperial belief is that a colonial and imperialist government believes it can wage war on anyone, especially anyone who stands in it’s way.

Recently I tweeted I do not stand during the Star Bangled Banner. As much as I enjoy attending sports events, I do not stand knowing the Star Bangled Banner was not written with the inclusion of any people of color. In fact, we are not “free” nor was the land “won”, if anything, we as Indigenous people are still fighting for our “freedom” even more, we are fighting for Mother Earth. I believe my ancestors fought valiantly and today I stand with them. They fought and won some battles, but the war continues. We are still fighting for our rights to remain Indigenous. I’m going to honor veterans of war for my homelands. I honor my Dine ancestors who were forced to march to Bosque Redondo, but also my Nimiipuu ancestors who died fleeing from the US Cavalry into Sitting Bull’s camp across the Medicine Line.

They are the real warriors, both men and women, but also the children who died fighting to continue to live a way of life as Indigenous people. I stand with my ancestors and memorialize their lives as they are the ones who truly fought for “freedom”

I am a direct descendent of Shot in the Hand who lost his fingers in the Civil War (Union) and not in the Nez Perce War as some people have shared.

The other photo is of his brother Tom Hill, Jr. wearing a wolf pelt, his pipe is at the NMAI and repatriation has been a long battle.

These men are the sons of Delaware Tom who was the first born son of Russian Jewish immigrant Thomas Hilstein who married a Lenape woman. “Delaware Tom” who came out west from New York (or New Amsterdam) was one of the first Native students to attend Dartmouth when it was an Indian school. This is my family history as I was told by my late elder. 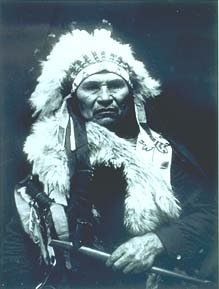