Sitting through roundtable discussions on Indigenous education issues was great for stimulation. Conversations about what and who researched what are common.

In no particular order, researchers, faculty, administrators, teachers, policy makers, and the like convene to talk about areas of research that interest them.

As an emerging Indigenous scholar I found myself in conversation with junior and senior scholars about their work and sharing my journey. Meeting both Indigenous and non Indigenous scholars was an over stimulation at one point, however the highlight was the validation.

The struggles and accomplishments that an individual experiences on the doctoral journey is unique. All thought I am quite aware that the path to success is an individual process, I am always curious how individuals navigated the academic waters.

While the personal conversations are always a treat for me, there are also the impersonal, shallow, and less than stellar ones. I want to share a couple that I had which made me think the struggle is real for Indigenous and any non white researchers when there are settler colonial agendas at play.

I’ve had the privilege and opportunity to attend receptions hosted by two Ivy League schools and can I just say it was quite interesting. The amount of white privilege and what may seem innocuous to these individuals that represent these universities was actually egregious to me.

While I attend a R1 institution and I have experienced my fair share of set backs and eye opening moments, these by far were the icing on the cake. The next part of my blog is a scene that seals it for me, some people ask stupid questions.

Scene 1: A young 24 year old white woman who is recently engaged and on a high of becoming Mrs. White Guys Wife was pretty much the reason why I decided to leave an event. She began by asking the most obvious, “who are you and what are you researching?” Typical conversation starter and not out of the ordinary at all. I engaged in her conversation and was more interested in her story. “Where’d you grow up, where you from” etc. The more intimate kind of get to know you questions rather than the superficial boring researcher ones… (We get plenty of those.)

As she shared her story she came upon the day she decided to move to where she currently lived because she had met her fiancé. Sounded cool at first, but as I listened to her reveal other details I started to think about the area where she came from and she shared her family was Irish and her fiancé was Aussie. The two had decided to choose a country that was “neutral” and decided on Mexico. How quaint.

She shared the idea came to her about Mexico because she had “researched inexpensive weddings.” Fair enough, she is a researcher. However as she shared more on how much it would cost and that she nor anyone on either side of the family had to worry about anything it was gonna be “an inexpensive wedding package.”

Mind you when I asked her what part of Mexico, I immediately thought of my Zapatista brothers and sisters. She shared they would all fly into Mexico City and will vacation on the beach and booked rooms at the local resort. My mind starts thinking of who works at these resorts and the wages of the employees at these resort hotels.

A two week stay with family sounded pretty awesome, (trust I dreamed about it for a New York minute) then remembered, IGov Indigenous Leadership Forum readings on Subcomandante Marcos and the EZLN.

For real, it made me think that I didn’t need to be there, especially after she asked what would I do and if I would buy a hotel sponsored wedding package or do it all by myself. Silly white girl, first of all, No. Second, I wouldn’t plan my next wedding by myself, I’ll include my family and it will be a celebration and union of families, much like theirs, but one where music, dancing, food, and stories will be told… but one with some fist raising because I’d like it to reflect and embody the Indigenous resistance.

I almost shared more as to how I hoped a wedding could go, I reflected, in that moment, on the Indigenous resurgence of culture that includes family traditions. However, because I didn’t think she was worthy of that much of who I was here’s what I shared. “If I could get married in Mexico, I’d head into the villages with my family and celebrate with the Zapatistas.” The next part of the conversation is what led me to get up and leave, but not until after I graciously shared who “the Zapatista” are. That’s another story.

Let me just say… She blank stared at me after and all I kept seeing was the look on her face and her question when I first introduced them, “I’m sorry, you’ll have to excuse me, I’m not sure what that is, what is the Zapatista?”

*End of story, that, my dear readers is my blog thoughts out loud for the moment. I’m still in a bit of disbelief, this is an Ivy League school folks. Ivy. League. These people are real. Real white. 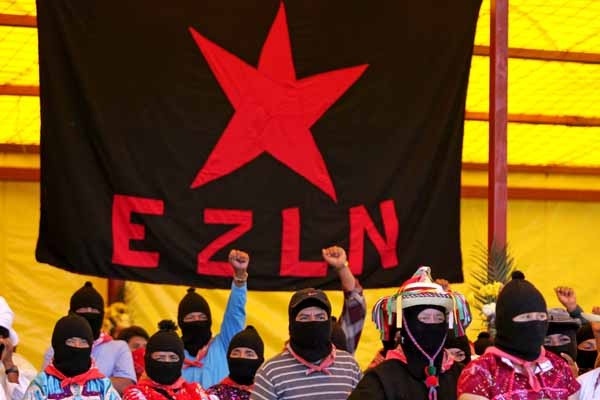