#WorkHardPlayHard I don’t care what it is you do, and whatever it is… Do it up big and do your best. #DoWork 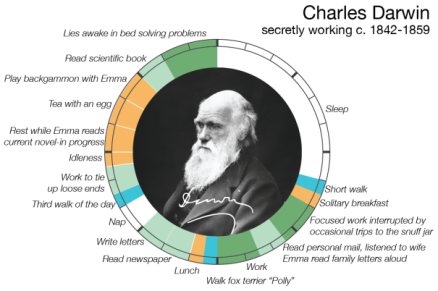 “We all have the same 24 hours that Beyoncé has” and its various iterations took the web by storm in late 2013 as the megastar became the figurehead of not only having it all, but being able to somehow do it all too.

How do creatives – composers, painters, writers, scientists, philosophers – find the time to produce their opus? Mason Currey investigated the rigid Daily Rituals that hundreds of creatives practiced in order to carve out time, every day, to work their craft. Some kept to the same disciplined regimen for decades while others locked in patterns only while working on specific works.

There are enough data to visualize a portion of the hundreds of creative lifestyles. Click the poster to discover: